Its formula is given as:

Where C is capacitance, Q is voltage, and V is voltage. We can also find charge Q and voltage V by rearranging the above formula as:

What are the factors that effect the capacitance of capacitor?

It depends on the following factors: 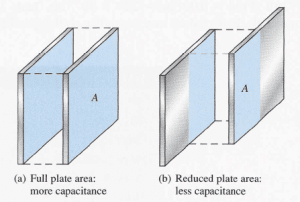 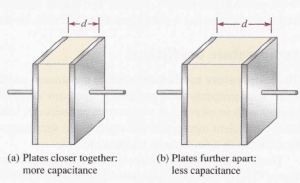 As you know, the insulating material between the plates of a capacitor is called the dielectric. Dielectric materials tend to reduce the voltage between plates for a given charge and thus increase the capacitance. If the voltage is fixed, more charge can be stored due to the presence of a dielectric than can be stored without a dielectric. The measure of a material’s ability to establish an electric field is called dielectric constant or relative permittivity, symbolized by ∈r.

Capacitance is directly proportional to the dielectric constant. The dielectric constant of a vacuum is defined as 1 and that of air is very close to 1. These values are used as a reference, and all other materials have values of ∈r specified with respect to that of a vacuum or air. For example, a material with ∈r=8 can result in a capacitance eight times greater than that of air with all other factors being equal.

Below given some common dielectric materials and typical dielectric constants for each. Values can vary because they depend on the specific composition of the material. 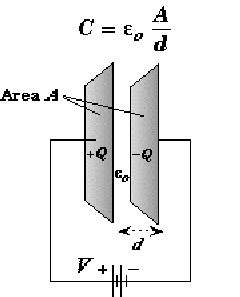 The electric field ‘E’ between the parallel plate capacitor is:

Consider a cylindrical capacitor of length L, formed by two coaxial cylinders of radii ‘a’ and ‘b’.Suppose L >> b, such that there is no fringing field at the ends of cylinders. 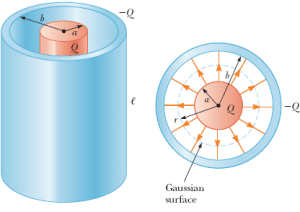 Let ‘q’ is the charge in the capacitor and ‘V’ is the potential difference between plates. The inner cylinder is positively charged while the outer cylinder is negatively charged. We want to find out the expression of capacitance for the cylindrical capacitor. For this, we consider a cylindrical Gaussian surface of radius ‘r’ such that a<<b.

If ‘E’ is the electric field intensity on any point of the cylindrical Gaussian surface, then by Gauss’s law:

If ‘V’ is the potential difference between plates, then

This is the relation for the capacitance of a cylindrical capacitor.

Capacitance of a spherical capacitor 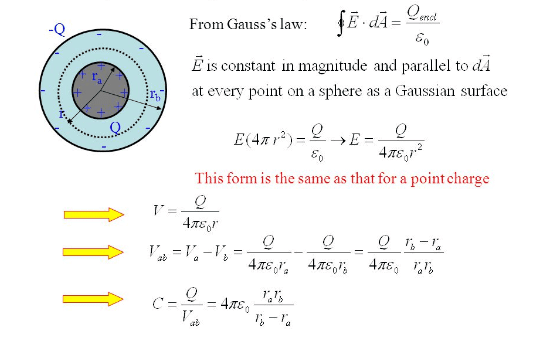 Capacitance of an isolated spherical capacitor

Combination of capacitance in series and parallel circuit

What is difference between Electrostatic force and nuclear force

Types of Magnetic Materials With Examples