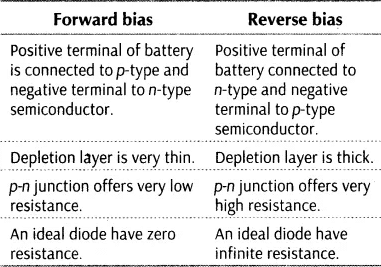 The bias a diode, you apply a dc voltage across it. Forward bias is the condition that allows current through the pn junction. A dc voltage source connected by a conductive material (contacts and wire) across a diode in the direction to produce forward bias.
This external bias voltage is designed as V BIAS. The resistor limits the forward current to a value that will not damage the diode. Notice that the negative side V BIAS is connected to the n region of the diode and the positive side is connected to the p region. This is one requirement for forwarding bias. A requirement for forward bias. A second requirement is that the bias voltage V BIAS must be greater than the barrier potential.

A fundamental picture of what happens when a diode is forward-biased. Because as charges repel, the negative side of the bias-voltage source “pushes” the free electrons, which are the majority carriers in the n region, toward the pn junction. This flow of free electron is called electron current. The negative side of the source also provides a continuous flow of electrons through the external connection (conductor) and into the n region.
The bias-voltage source imparts sufficient energy to the free electrons for them to overcome the barrier potential of the depletion region and move on through into the p region, these conduction electrons have lost enough energy to immediate combine with holes in the valence band.

Now, the electrons are in the valence band in the p region, similarly because they have lost to much energy overcoming the barrier potential to remain in the conduction band. Since unlike charges attract, the positive side of the bias-voltage source attracts the valance electrons towards the left of the p region. The holes in the p region provide the medium or “pathway” for these valence electrons to move through the p region. The valence electrons move from one hole to the next toward the left. The holes, which are the majority carriers in the p region, effectively (not actually )move to the hole current. You can also view the hole current is being created by the flow of valence electrons through the p region, with the holes providing the only means for these electrons to flow.
As the electrons flow out of the p region through the external connection (conductor) and to the positive side of the bias-voltage source, they leave holes behind the p region; at the same time, these electrons become conditions electrons in the metal conductor.
Recall that the conduction band in a conductor overlaps the valence band so it takes much less energy for an electron to be a free electron in a conductor than in a semiconductor and that metallic conductors do not have holes in their structure.
There is continuous availability of holes effectively moving toward the pn junction to combine with the continuous stream of electrons as they come across the junction into the pn region.

The Effect of Forward Bias on the Depletion Region

The Effect of the Barrier Potential During Forward Bias

Reverse bias is the condition that essentially prevents current through the diode.

In figure, a dc voltage is a source connected across a diode in the direction to produce reverse bias. This external bias voltage is designated as VBIAS  just as it was for forwarding bias. Notice that the positive side of VBIAS is connected to the n region of the diode and the negative side is connected to P region. Also note that the depletion region is shown much wider than in forward bias or equilibrium.
As an illustration of what happens when a diode is reverse biased is shown in the figure.

The extremely small current that exists in reverse bias after the transition current dies out is caused by the minority carriers in then and p regions that are produced by thermally generated electron-hole pairs.The small number of free minority electrons in the p region are “pushed” toward the pn junction by the negative bias voltage.When these electrons reach the wide depletion region, they “fall down the energy hill and combine with the minority holes in then region as valence electrons and flow toward the positive bias voltage, creating a small hole current.
The conduction band in the p region is at a higher energy level than the conduction band in the n region. Therefore, the minority electrons easily pass through the depletion region because they require no additional energy. Reversed current is shown in the figure.

Normally, the reverse current is so small that it can be neglected. However, if the external reverse bias voltage is increased to a value called the breakdown voltage, the reverse current will drastically increase.
That is what happens. The high reverse bias voltage imparts energy to the free minority electrons so that as they speed through the p region, they collide with atoms with enough energy to knock valence electrons out of orbit and into the conduction band. The newly created conduction electrons are also high in energy and repeat the process. If one electron knocks only two others out of their valence orbit during its travel through p region, the numbers quickly multiply. As these high energy electrons go through the depletion region, they have enough energy to go through then region as conduction electrons, rather than combining with holes.
The multiplication of conduction electrons just discussed is known as the avalanche effect, and reverse current can increase dramatically if steps are not taken to limit the current. When the reverse current is not limited, the resulting heating will permanently damage the diode. Most diodes are not operated in reverse breakdown, but if the current is limited by adding a series limiting resistor, for example, there is no permanent damage to the diode.

structure of atom for class 9 and 11