The name mutivibrator designates a group of the circuits widely applied for switching as shift registers or temporary memories and as square were timing oscillator or clocks. These circuits are basically closed loop feedback circuits operating with the feedback.

There are three general types of multivibrators, which are:

Some of the uses of multivibrators are:

What is meant by Astable multivibrator ? 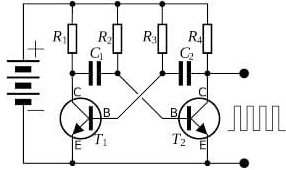 The astable or free-running multivibrator continuously switches from one state to the other and back to the first state. In other words, it switches between two limits without the application of an external signal. It is a square rectangular wave oscillator.
It is also called a free-running relaxation oscillator. It has no stable state but only has two half-stable states between which it oscillates.
In this circuit, none of the two transistors reach a stable state. When one transistor is ON the other transistor is OFF and in this way, they continuously switch to and fro at a rate depending on the RC time constant in the circuit. In this way, it oscillates and generates pulses. Besides this two outputs of 180º are available.
It has two also two energy storing capacitors.

What is meant by  One shot Or Mono State Multivibrator? 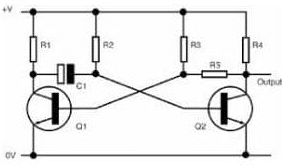 What is meant by bistable (flip flop) multivibrator? 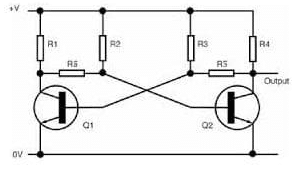 How many Types of MOSFET Transistor?