One way of describing the motion of a fluid is to divide the fluid into infinitesimal volume elements, which we may call fluid particles, and to follow the motion of each particle. If we knew the forces acting on each fluid particle, we could then solve for the coordinates and velocities of each particle as functions of the time. This procedure, which is a direct generalization of particle mechanics, was first developed by Joseph Louis Lagrange (1736 – 1813). Because the number of fluid particles is generally very large, using this method is a formidable task.

There is a different treatment, developed by Leonhard Euler (1707 – 1783), that is more convenient for most purposes. In it we give up the attempt to specify the history of each fluid particle and instead specify the density and the velocity of the fluid at each point in space at each instant of time. This is the method we shall use. We describe the motion of the fluid by specifying the density ρ(x,y,z,t) and the velocity v( x,y,z,t) at the point x,y,z at the time t. We thus focus our attention on what is happening at a particular point in space at a particular time, rather than on what is happening to a particular fluid particle. Any quantity used in describing the state of the fluid, for example, the pressure p, will have a definite value at each point in space and at each instant of time. Although this description of fluid motion focuses attention on a point in space rather than on a fluid particle, we cannot avoid following the fluid particles themselves, at least for short time intervals dt. After all, the laws of mechanics apply to particles and not to points in space.

We first consider some general characteristics of fluid flow.

To simplify the mathematical description of fluid motion, we confine our discussion of fluid dynamics for the most part to the steady, in-compressible,non-viscous, irrotational flow. We run the danger, however, of making so many simplifying assumptions that we are no longer talking about a real fluid. Furthermore, it is sometimes difficult to decide whether a given property of a fluid- its viscosity, say – can be neglected in a particular situation. In spite of all this, the restricted analysis that we are going to give has wide application in practice, as we shall see.

What is Continuity equation in fluid mechanics?

“The product of the cross-sectional area of the pipe and the fluid speed at any point along the pipe is constant. This product is equal to the volume flow per second or simply flow rate.”

Mathematically it is represented as:

Consider a fluid flowing through a pipe of non-uniform size. The particles in the fluid move along the same lines in a steady flow. 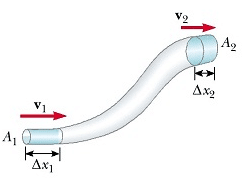 If we consider the flow for a short interval of time Δt, the fluid at the lower end of the pipe covers a distance Δx1 with a velocity v1, then:

If ρ is the density of the fluid, then the mass of the fluid contained in the shaded region of the lower end of the pipe is:

Now the mass flux defined as the mass of the fluid per unit of time passing through any cross-section at the lower end is:

If the fluid moves with velocity v2 through the upper end of the pipe having cross-sectional area A2 in time Δt, then the mass flux at the upper end is given by:

In a more general form we can write :

This relation describes the law of conservation of mass in fluid dynamics. If the fluid is incompressible, then density is constant for a steady flow of incompressible fluid so

Now equation (4) can be written as:

If R is the volume flow rate then :

Mass of earth and radius in physics