How many types of elementary particles are there? 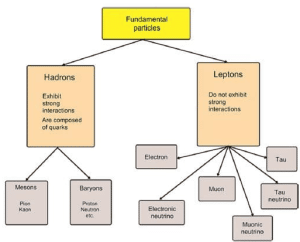 Elementary particles can be divided into the following four categories.

The real nature of elementary particles is still not clearly understood, and so their study is one of the most active branches of modern research.
All elementary particles have antiparticles, except the photon and neutral π-meson. A particle and its antiparticle can undergo annihilation. Thus an electron and a positron can annihilate each other.
That is why positrons and anti-positions are not easily found in the part of the universe where we live. An antihydrogen atom may be formed by an antiproton and an anti-electron, just as ordinary hydrogen is formed by a proton and an electron, and it is possible that distant stars may be composed entirely of antimatter.
If matter and antimatter come close to each other, there would be a very dangerous explosion due to their annihilation. If there are stars composed entirely of antimatter, it is good for us to remain far away from them.

Uses of laser in Everyday Life