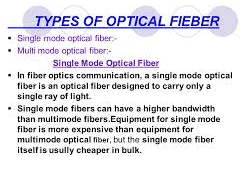 For hundreds of years, man has communicated using flashes of reflected Sunlight by day and lanterns by night. Navy signalmen still use powerful blinker lights to transmit coded messages to other ships during periods of radio silence. Light communication has not been confined to simple dots and dashes.

It is an interesting but little-known fact that Alexander Graham Bell invented a device known as “the photo phone” shortly after his invention of the telephone. Bell’s photo phone used a modulated beam of reflected sunlight, focussed upon a Selenium detector several hundred metres away. With the device, Bell was able to transmit a voice message via a beam of light.

The idea remained dormant for many years. In the recent past, the idea of transmission of light through thin optical fibres has been revived and is now being used in communication technology.

The use of light as a transmission carrier wave in fibre optics has several advantages over radio wave carriers such as a much wider bandwidth capability and immunity from electromagnetic interference.

It is also used to transmit light around corners and into inaccessible places so that the formerly unobservable could be viewed. The use of fibre optic tools in the industry is known as very common, and their importance as diagnostic tools in medicine has been proven.

Recently fibre optic technology has evolved into something much more important and useful a communication system of enormous capabilities.

One feature of such a system is its ability to transmit thousand of telephone conversations, several television programs and numerous data signals between stations through one or two flexible, hair-thin threads of optical fibre. With the tremendous information-carrying capacity called the bandwidth, fibre optic systems have undoubtedly made practical such devices as two-way television which was too costly before the development of fibre optics. These systems also allow word processing, image transmitting and receiving equipment to operate efficiently.

In addition to giving an extremely wide bandwidth, the fibre optic system has much thinner and lightweight cables. An optical fibre with its protective case may be typically 6.0 mm in diameter, and yet it can replace a 7.62 cm diameter bundle of copper wires now used to carry the same amount of signals.

How do Fibre Optics work?

Propagation of light in an optical fibre requires that the light should be totally confined within the fibre.

This may be done by total internal reflection and continuous refraction.

There are three types of fibre optics which are classified on the basis of the mode by which they propagate light. These are:

The term’ mode ‘ is described as the method by which light is propagated within the fibre,i.e.the various paths that light can take in travelling down the fibre. The fibre optic is also covered by a plastic jacket for protection.

Single mode or mono mode step index fibre has a very thin core of about 5 μm diameter and has a relatively larger cladding (of glass or plastic). Since it has a very thin core, a strong monochromatic light source i.e,a laser source has to be used to send light signals through it.It can carry more than TV channels or 14000 phone calls.

This type of fibre has a core of a relatively larger diameter such as 50 μm. It is mostly used for carrying white light but due to dispersion effects, it is useful for short distances only. The fibre core has a constant refractive index n1, such as 1.52, from its centre to the boundary with the cladding. The refractive index then changes to a lower value n2, such as 1.48, which remains constant throughout the cladding.

This is called a step-index multimode fibre because the refractive index steps down from 1.52 to 1.48 at the boundary with the cladding.

Multi-mode graded-index fibre has a core which ranges in diameter from 50 to 1000 μm. It has a core of a relatively high refractive index and the refractive index decreases gradually from the middle to the outer surface of the fibre. There is no noticeable boundary between the core and the cladding. This type of fibre is called a multi-mode graded index fibre and is useful for long-distance applications in which white light is used. The mode of transmission of light through this type of fibre is also the same,i.e, continuous refraction from the surface of smoothly decreasing refractive index and total internal reflection from the boundary of the outer surfaces.

Signal transmission and conversion to sound

The light source in the transmitter can be either a semiconductor laser or a light-emitting diode (LED). With either device, the light emitted is an invisible infrared signal. The typical wavelength is 1.3μm. Such light will travel much faster through optical fibres than will either visible or ultraviolet light. The lasers and LEDs used in this application are tiny units (less than half the size of the thumbnail) in order to match the size of the fibres. To transmit information by light waves, whether it is an audio signal, a television signal or a computer data signal, it is necessary to modulate the light waves. The most common method of modulation is called digital modulation in which the laser or LED is flashed on and off at an extremely fast rate. A pulse of light represents zero. In a sense, instead of flashes of light travelling down the fibre, ones (1s) and zeroes (0s) are moving down the path.

With computer-type equipment, any communication can be represented by a particular pattern or code of these 1 s and 0 s. The receiver is programmed to decode the 1s and 0 s, thus it receives, the sound, pictures or data as required. Digital modulation is expressed in bits (binary digits) or megabits (106 bits) per second, where a bit is a 1 or a 0.

Despite the ultra purity (99.99 % glass ) of the optical fibre, the light signals eventually become dim and must be regenerated by devices called repeaters. Repeaters are typically placed about 30 km apart, but in the newer systems, they may be separated by as much as 100 km.

At the end of the fibre, a photodiode converts the light signals, which are then amplified and decoded, if necessary, to reconstruct the signals originally transmitted.

What are the best Types of Telescopes?