Newton went a step further in his analysis of gravity. In his examination of the orbits of the planets, he concluded that the force required to hold the different planets in their orbits around the Sun seems to diminish as the inverse square of their distance from the Sun. This led him to believe that it is also the gravitational force that acts between the Sun and each of the planets to keep them in their orbits. And if gravity acts between these objects, why not between all objects? Thus he proposed his law of universal gravitation. 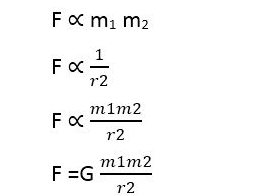 Here G is the proportionality constant. It is called the universal constant of gravitation. Its value is the same everywhere. In SI units its value is 6.673 × 10-11 Nm2kg-2. The universal constant G must not be confused with the g that is the acceleration of a body arising from the earth’s gravity. The constant G has the dimensions L3/MT2 and is a scalar quantity, While g is the magnitude of a vector, has the dimensions L/T2, and is neither universal nor constant.
Due to a small value of G, the gravitational force of attraction between objects around us is very small and we do not feel it. Since the mass of the earth is very large, it attracts nearby objects with a significant force. The weight of an object on the earth is the result of the gravitational force of attraction between the earth and the object.
It is important to note that the gravitational forces between two particles are an action-reaction pair. The first particle exerts a force on the second particle that is directed toward the first particle along the line joining them. Likewise, the second particle exerts a force on the first particle that is directed toward the second particle along the line joining them. These forces are equal in magnitude but opposite in direction.

Let’s see a video about the universal law of gravitation.