The momentum of a body is the quantity of motion it possesses due to its mass and velocity. We are aware of the fact that moving object possesses a quality by virtue of which it exerts a force on anything that tries to stop it. The faster the object is traveling, the harder is to stop it. Similarly, if two objects move with the same velocity, then it is more difficult to stop the massive of the two. A bullet has very small inertia due to its small mass. But why does its impact is so strong when it is fired from the gun?

On the other hand, the impact of a loaded truck on a body coming its way is very large even if the truck is moving slowly. To explain such situations, we define a new physical quantity called momentum.

This quality of the moving body was called the quantity of the motion of the body, by newton. This term is know called linear momentum of the body and is defined by the relation:

In this expression v is the velocity of the mass m. Linear momentum is, therefore, a vector quantity and has the direction of velocity.

The SI unit of momentum is kgms-1 (kilogram meter per second). It can also be expressed as newton second (Ns).

Relation between Force and Momentum

Consider a body of mass m moving with an initial velocity vi . Suppose an external force F acts upon it for time t after which velocity becomes vf and acceleration are produced in the body. If Pi and Pf be the initial momentum and final momentum of the body related to initial and final velocities respectively then:

Thus the rate of change in momentum is given by:

The above equation defines force and states newton’s second law of motion as:

“When a force acts on a body, it produces an acceleration in the body and will be equal to the rate of change of momentum of the body.”This form of the second law is more general than the form F =ma because it can easily be extended to account for changes as the body accelerates when its mass also changes. For example, as a rocket accelerates, it loses mass because its fuel is burnt and ejected to provide greater thrust.

Impulse is defined as: “The product of force and time for which it acts on a body.”

Sometimes we wish to apply the concept of momentum to cases where the applied force is not constant, it acts for a very short time. For example, when a bat hits a cricket ball, the force certainly varies from instant to instant during the collision. In such cases, it is more convenient to deal with the product of force and time (F × t) instead of either quantity alone. The quantity F× t is called the impulse of the force, where F can be regarded as the average force that acts during time t.

Equation of impulse and momentum

The negative sign indicates that the force is retarding one.

In case of an accident, a person not wearing a seat belt will continue moving until stopped suddenly by something before him. This something may be a windscreen, another passenger, or back of the seat in front of her/him. Seat belts are useful in two ways: 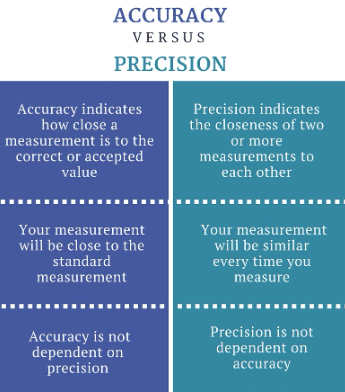 Difference between Accuracy and Precision