In order to understand the distribution of radiation emitted from a hot body. We consider a non-reflecting object such as a solid that has a hollow cavity within it. It has a small hole and the radiation can enter or escape only through this hole. The inside is blackened with soot to make it as good an absorber and as bad a reflector as possible. The small hole appears black because the radiation that enters is reflected from the inside walls many times and is partly absorbed in each reflection until none remains. Such a body is termed a black body and has the property to absorb all the radiation from entering it. A black body is both an ideal absorber and an ideal radiator.

Lummer and Pringsheim measured the intensity of emitted energy with wavelength radiated from a black body at different temperatures. The amount of radiation emitted with different wavelengths is shown in the form of energy distribution curves for each temperature in the figure below. 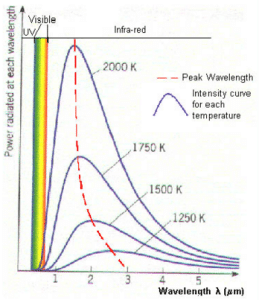 The value of the constant is about 2.9 × 10-3 m K. This equation means that as T increases, λ shifts to the shorter wavelength.

The area under each curve represents the total energy (E) radiated over all wavelengths at a particular temperature. It is found that area is directly proportional to the fourth power of kelvin temperature T.Thus

Where σ is called Stephen’s constant. Its value is 5.67 ×10-6 Wm2k-4 and the above relation is known as Stephen Boltzmann law.

The electromagnetic wave theory of radiation cannot explain the energy distribution along the intensity wavelengths curves. The successful attempts to explain the shape of energy distribution curves gave rise to a new and non-classical view of electromagnetic radiation. In 1900, Max plank founded a mathematical model resulting in an equation that describes the shape of observed curves exactly. He suggested that energy is radiated or absorbed in discrete packets, called quanta rather than as a continuous wave. Each quantum is associated with radiation of a single frequency. The energy E of each quantum is proportional to the frequency f, and:

Here h is Plank’s constant. Its value is 6.63×10 -34 J s. This fundamental constant is important in physics as the constant c, the speed of light in a vacuum.

Max Planck received the Nobel prize in physics in 1918 for his discovery of energy quanta.