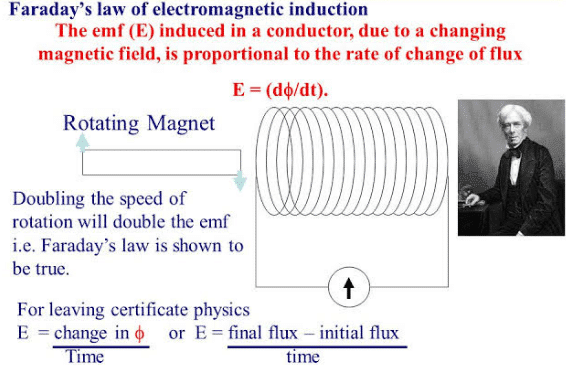 Faraday’s law of induction was discovered through experiments carried out by Micheal Faraday in England In 1831 and by Joseph Henry in the United States at about the same time.
Even though Faraday published his results first, which gives him priority of discovery, the SI unit of inductance is called the henry (abbreviation H). On the other hand, the SI unit of capacitance is, as we have seen, called the farad (abbreviation F).
In the chapter, we discuss oscillations in capacitative-inductive circuits, we see how appropriate it is to link the names of these two talented contemporaries in a single context.

*In addition to their independent simultaneous discovery of the law of induction, Faraday and Henry have several other similarities in their lives. Both were apprentices at an early age. Faraday, at age 14, was apprenticed to a London bookbinder. Henry at age 13, was apprenticed to a watchmaker in Albany, New York. In later years Faraday was appointed a director of the royal institution in London, whose founding was due in large part on an American, Benjamin Thomson (Count Rumford). Henry, on the other hand, because the secretary of the Smithsonian Institution in Washington, DC, which was found by an endowment from an Englishman, James Smithson.

Figure (1) shows a coil of wire as a part of a circuit containing an ammeter. Normally, we would expect the ammeter to show no current in the circuit because there seems to be no electromotive force. However, if we push a bar magnet toward the coil, with its north pole facing the coil, a remarkable thing happens. While the magnet is moving, the ammeter deflects, showing that the current has been set up in the coil. If we hold the magnet stationary with respect to the coil, the ammeter does not deflect. If we move the magnet away from the coil, the meter again deflects, but in the opposite direction, which means that the current in the coil is in the opposite direction. If we use the north pole end of a magnet instead of the north pole end, the experiment works as described but the deflections are reversed. The faster the magnet is moved, the greater is the reading of the meter. Further experimentation shows that what matters is the relative motion of the magnet and the coil. It marks no difference whether we move the magnet toward the coil or the coil toward the magnet.

“The induced emf in the circuit is equal to the negative of the rate at which the magnetic flux through the circuit is changing with time.”Mathematically it is written as:

To make this statement quantitative, we introduce the magnetic flux ΦB, which is  stated as “The number of magnetic lines of force passing normally through the certain area is called magnetic flux.” It is denoted as ΦB. It is a scalar quantity and its SI unit is Weber (Wb). It is measured by the product of magnetic field strength and the component of the vector area parallel to the magnetic field. Mathematically it is represented as:

Where A is a vector whose magnitude is the area of the element and whose direction is along the normal to the surface of the element,θ is the angle between the directions of the vectors B and A.

These results are quite remarkable in view of the fact that a current is set up even though no batteries are present in the circuit. We call such a current induced current which is produced by induced emf. This phenomenon is called electromagnetic induction.

There are other related topics on our website are:
1: Lenz’s law
2:Electromagnetic induction
3:Transformer
4:Magnetism
External sources

Different Types of Transducers and Their Applications

Types of Electromagnetic Waves And Their Uses

What are Different Types of magnets?