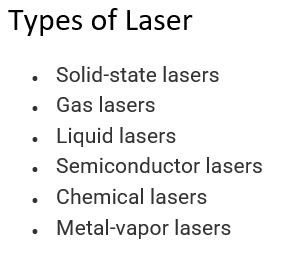 Basically, there are four types of laser which includes:

The name “LASER” stands for light Amplification by Stimulated Emission of Radiation. The lasers are used to produce light having the following properties:

formula
The degree of monochromaticity depends upon the light source and the level of excitation of the light medium. It may be broadband in the case of white light or a narrow band for laser light. Filtering the one particular λ can be achieved using a special type of filter but in most applications, low-cost gelatin filters are used, this process is called single moving. practically achieving ΔV=0 is quite an expensive task, due to the rational step-wise varying of λ, one can never obtain a single value of λ in a laser spectrum.

laser is a highly collimated light source. The directionality is measured by full-angle beam diversions in degrees/minutes/seconds or in radians, this angle is twice the angle between the edges of a laser beam with it center propagation axis. The edge of the laser cone is selected where the beam strength dropped to (1/e) or 37% of the value at the center of the beam. Generally, a typical laser has beam diversions of 0.1 mrad. The degree of diversion tells us how rapidly a laser beam diverges when it leaves the cavity.

The cavity mirror reflections control the beam diversions, the more reflections from mirrors increase the effective traveling length of the beam and when the beam is transmitted from the laser cavity it appears to come from a point at a distance equal to n cavity length containing n collimating apertures.

radiation output from a laser is highly brightened i.e. having a large value of luminance intensity (Iv) per unit projected area also called luminance or brightness measured in lumen/m2/-steradian. The study of characteristics of visible light lies in the field of photometry while the remaining spectrum including microwave, radio wave, UV, NIR, MIR, and FIR belongs to the field of radiometry.
The sensitivity of the human eye is maximum at 555m, in daylight and 510 nm in the night. From fig
figure
from the figure, it is evident that for UV and IF the sensitivity is zero for a typical human eye but it is possible that any other species have spectral sensitivity in these spectral regions.
It should be noted that 1watt of radiant power Φe in radiometry is equivalent to 680 lumens luminance power or flux at 555 nm in a photometer. it is possible that a high radiant power source has null photometric values but the opposite is not true. E.g infrared and UV laser sources must be measured in radiometric units, there corresponding photometric values are always null.

For light sources or radiant sources with continuous radiation or continuous wave (CW) output, all radiometric and photometric quantities have significance but in the case of pulse output, the quantity of interest is the total radiant energy or luminous energy in a single pulse.

How does a laser work?

The working principle of LASER is based upon spontaneous and stimulated emission.

Consider a sample of free atoms some of which are in the ground state with energy E1 and some in the excited state E2. The photons of energy hf=E2-E1 are incident on this sample. These incident photons can interact with atoms in two different ways. The incident photon is absorbed by an atom in the ground state E1, thereby leaving the atom in the excited state E2. This process is called stimulated or induced absorption. Once in the excited state, two things can happen to the atom. It may decay by spontaneous emission( in which the atom emits a photon of energy hf=E2-E1 in any arbitrary direction.

The other alternative for the atom in the excited state E2 is to decay by stimulated or induced emission as shown in the figure.

In this case, the incident photon of energy hf=E2-E1 induces the atom to decay by emitting a photon that travels in the same direction. This gives an amplified as well as unidirectional coherent beam. From a practical point, this is possible only if there is more stimulated or induced emission than spontaneous emission. This can be achieved by population inversion.

Let us consider a simple case of material whose atom can reside in three different states as shown in the figure. 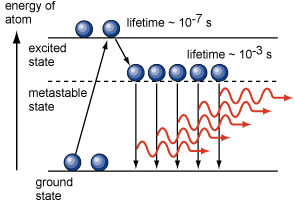 E1 is the ground state; the excited state E3, in which the atoms can reside only for 10-8 s, and the metastable state E 2, in which atoms can reside for 10-3 s, much longer than 10-8 s as in the excited state. A metastable is excited in which an electron is unusually stable and from which the electron spontaneously falls to a lower state only after a relatively long time. The transition from this state or to this state is difficult as compared to other excited states. Hence, instead of a direct transition to this state, the electrons are excited to a higher level from which the electrons spontaneously fall to a measurable state.

Now let us assume that the incident photons of energy hf =E1 – E3 raise the atom from the ground state to E1 to the excited state E3. But the excited atoms do not decay back to E1 much faster than they leave E2. This eventually leads to the situation that the metastable state E2 contains more atoms than the ground state E1. This situation is known as population inversion.

Once the population inversion has been reached, the lasing action of a laser is simple to achieve. The atoms in metastable state E2 are bombarded by photons of energy hf=E2 -E1, resulting in an incident an induced emission. This gives an intense, coherent beam in the direction of the incident photon.

The emitted photons must be confined in the assembly long enough to stimulate further emission from other excited atoms. This is achieved by using mirrors at the two ends of the assembly. One end is made totally reflecting, and the other end is partially transparent to allow the laser beam to escape. As photons move back and forth between the reflecting mirrors they continue to stimulate other excited atoms to emit photons. As the process continues the number of photons multiplies, and the resulting radiation is, therefore, much more intense and coherent than light from ordinary sources.