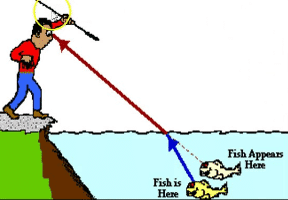 Why does refraction occur?

If we dip one end of a pencil or some other object into the water at an angle to the surface, the submerged part looks bent. Its image is displaced because the light coming from the underwater portion of the

object changes direction as it leaves the water. This bending of light as it passed from one transparent medium into another is called refraction.

The refraction of light can be explained with the help of the figure given below. A ray of light IO travelling from air falls on the surface of a glass block.

Laws of refraction of light

Where the ratio Sin i/Sin r is known as the refractive index of the sound medium with respect to the first medium. So we have:

It is called Snell’s law.

The refractive index ‘n’ of a medium is the ratio of the speed of light ‘c’ in the air to the speed ‘v’ of light in the medium.

A table of the refractive index of some substances is given:

Dispersion of light is due to the variation in refractive index with the colour. Dispersion in drops of water separates the colours of sunlight into a rainbow.

Refraction of light through Prism

Prism is a transparent object (made of optical glass) with at least two polished plane faces inclined towards each other from which light is refracted. In the case of a triangular prism, the emergent ray is not parallel to the incident ray. It is deviated by the prism from its original path. The incident ray PE makes an angle of incidence ‘i’ at point E and is refracted towards the normal N as EF.  The refracted ray EF makes an angle ‘r’ inside the prism and travels to the other face of the prism. This ray emerges from the prism at point F making an angle ‘e’. Hence the emerging ray FS is not parallel to the incident ray PE but it deviated by an angle D which is called the angle of deviation.

What are the best types of Binoculars to buy?

What are 7 Basic Properties of Light?