There are 7 basic properties of light :

Light behaves differently when it falls on different objects. When light falls on the surface of a non-luminous object,it can behave in three ways: 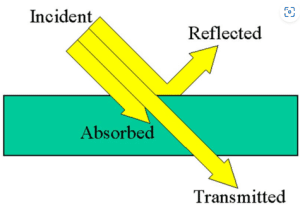 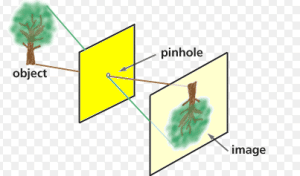 In this simple device, the image formation of a stationary object is formed on a photographic film or a white paper sheet. Those light rays that pass through the hole form the image of the object. In the figure such two rays emerging from object and passing through the hole and form image of the object,the image formed by this device is inverted.The image size is directly proportional to the separation between pinhole screen and photographic screen.For a sharp image formation the size of the pinhole must be much less than the size of the object,otherwise, blur image will be formed. This figure shows that light travels in straight lines.

“The splitting of white light into its component colours is called dispersion of light.”Sunlight is often called white light, although it is a combination of different colours. We can see these colours in a rainbow. These colours are red, orange, yellow, green, blue, indigo and violet.

We can split white light into its colours by passing it through the prism. The band of seven colours obtained is called the spectrum of white light.

Why does white light get dispersed?

When this spectrum is again passed through another prism as shown in the figure,a beam of white light is obtained.

“A rainbow forms when sunlight is refracted and totally reflected by tiny water droplets.”

A rainbow is a natural demonstration of refraction, dispersion and total internal reflection of light. When the white light of the sun passes through tiny raindrops suspended after rainfall, a rainbow may appear. Raindrops in the air act like tiny prisms. They refract and reflect the sunlight and then separate it into different colours. The colour scheme of the rainbow is the same as in the spectrum made by the prism. Since the red colour bends the least and the violet colour bends the most from its original path, in the rainbow, the red colour appears at the top and the violet colour appears at the bottom. The other colours appear in between these two colours.

An understanding of colours is very useful in photography and theatre lighting. People who work with lights of different colours must know how to produce lights of various colours from a few basic colours. The colours that can be used to make any other colour are called primary colours to produce white light. 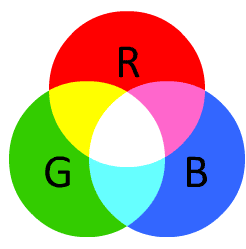 We can obtain other colours of light by mixing lights of primary and secondary colours.

When white light shines on non-luminous objects they reflect some colours and absorb all others. The colour of an object is the colour of the light it reflects. A red object appears red because it reflects the red colour of light and absorbs all the other colours. The grass of our lawn appears green as it reflects green light into our eyes. Why does a black car appear black?

How does a Diffraction grating work?

Different Types of Microscopes and their parts and function