So, if you want to get benefits from this post, you’ll love this.
Let’s get started…
This law consists of two parts i.e, if a body is at rest it will remain at rest until it is acted upon by an external force.
For example:
A book lying on a table or a table lying in a room, they will not change their position until an external force acts on it.
The other part of the law is “if a body is in uniform motion in a straight line it will continue its state until it is acted upon an external force.
For example:
When we roll a ball on the surface it will come to rest due to friction and air resistance. If these forces do not oppose the motion of the ball, it will continue its uniform motion. From the above discussion, we reach the following two very important concepts.

Here are some examples of Newton’s first law of motion  are given in the list: 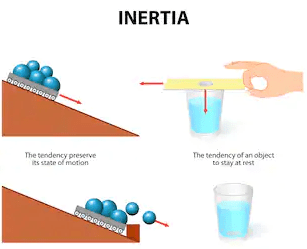 A block of stone that is hardly be pushed along the ground while a small wooden block can easily be pushed along the ground. The mass of the stone or wooden block is the mass of inertia.
For example:
A person riding a bicycle along a leveled road if stops pedaling does not come to rest immediately. The bicycle continues to move forward due to inertia. A small coin is put on a card and placed over the mouth of a glass. When the card is flicked away with the finger horizontally, the coin drops neatly into the glass due to inertia.

Why we need newton 1st law of motion?

From the section of forces, we discussed some properties of forces, but from that section, we said nothing about how forces affect motion.
Related topics:

Difference between North pole and south pole in tabular form

What are the Different Types of friction?