Pascal law states Pressure applied at any point of a liquid enclosed in a container is transmitted without loss to all other parts of the liquid. Hydraulic press, Hydraulic jack system, and brake system are a few applications of Pascal law. 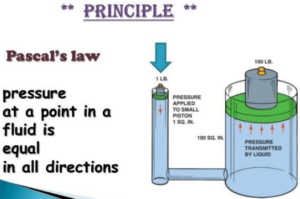 It can be demonstrated with the help of the glass vessel having holes all over its surface. Fill it with water. Push the piston. The water rushes out of the holes in the vessel with the same pressure. The force applied to the piston exerts pressure on the water. This pressure is transmitted equally throughout the liquid in all directions.
In general, this law holds good for fluids both liquids as well as gases.

Pascal’s law finds numerous examples in our daily life such as :

Comparing the above equations, we get:
F2/A= F1/a
Hence:
F2= A ×F1/a
OR
F2 = F1 ×A/a
Since the ratio is greater than 1, hence the force F2 that acts on the larger piston is greater than the force F1 acting on the smaller piston. Hydraulic systems working in this way are known as force multipliers.

The braking system in Vehicles

In a hydraulic lift, a narrow cylinder A is connected with a wider cylinder B and they are fitted with airtight pistons. It is filled with some incompressible fluid. Pressure can be applied to move the piston in cylinder A in the downward direction.
The pressure so applied is transmitted according to pascal’s principle to the piston of cylinder B. Consequently, the piston B moves upward in a hydraulic lift the piston B is used as a platform for a car or any heavier object to be lifted, like a truck, car, also in playland, etc.

What are the Different Types of friction?

How many Types of Errors in Physics?