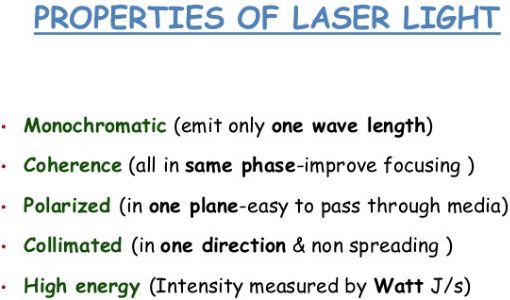 Properties of laser light are given in the list

Now we will discuss in detail about characteristics of laser light

Tungsten light spread over a continuous spectrum, gives no basis for comparison. The light from selected lines in a gas discharge tube (line spectrum) however can have wavelengths in the visible region that are precise to about 1 part in 106. The sharpness of definition of laser light can easily be a thousand times greater or 1 part in 109.

Wave trains for laser light may be several hundred kilometers long. Interference fringes can be set up by combining two beams that have followed separate paths whose lengths differ by much as this amount. The corresponding coherence length for light from a tungsten filament lamp or a gas discharge tube is typically considerably less than 1m.

A laser beam departs from strict parallelism only because of diffraction effects, determined by the wavelength and the diameter of the exit aperture.
Light from other sources can be made into an approximately parallel beam by a lens or a mirror, but the beam divergence is much greater than for laser light. E.g., focused light on a tungsten filament source forms a beam, the angular divergence of which is determined by the spatial extent of the filament.

This property is related to the parallelism of the laser beam. As for Starlight, the size of the focused spot for a laser beam is limited only by diffraction effects and not by the size of the source. Flux densities for focus light of 1015 w/cm2 are readily achieved. An oxyacetylene flame, by contrast, has a flux density of only 103 w/cm2.

Einstein and the Laser

Einstein introduced into physics a new concept of stimulated emission. Even though the first operating laser did not appear until 1960, the groundwork for its invention was out in place by Einstein’s work. The importance of stimulated emission is indicated by the name “Laser” which is an acronym for light amplification by the stimulated emission of radiation.
In 1917 Einstein succeeded in deriving the Planck radiation law in terms of beautifully simple assumptions and in a way that made quite clear the role of energy quantization and the photon and in a way that the photoelectric effect could be explained with its use.
Now let us take a look at three processes that involve the interaction between matter and radiation. Two of them absorption and spontaneous emission have long been familiar the third is stimulated emission.

An atomic system in the lower of two possible states of energies E1 and E2. A continuous spectrum of radiation is present. Let a photon from this radiation field approach the two-level atom and interact with it, and let the associated frequency v of the photon be such that
hv = E1 – E2      ———– – (1)

The result is that the photon vanishes and the atomic system move to its upper energy state. We call this process absorption.

The atomic system is in its upper state and there is no radiation nearby. After a mean time T, this (isolated) atomic system moves of its accord to the state of lower energy, emitting a photon of energy hv = E1 – E2 in the process. We call this process spontaneous emission in that no outside influence triggered the emission.
Normally, the main life T for spontaneous emission by an excited atom is of the order of 10-8s. However, there are some states for which T is much longer i.e., 10-3s which we call meta-stable states they play an essential role in laser operation. They have such long life because they can emit radiation only through processes that violate the selection rule.
The light from glowing lamp filament is generated by spontaneous emission. Photons produced in this way are totally independent of each other. In particular, they have different directions and phases. Put another way, the light they produced has a low degree of coherence.

The atomic system is again in its upper state, but this time radiation of frequency given by Eq. (1) is present. As in absorption, a photon of energy hv interacts with the system. The result is that the system is driven down to its lower state and these are two photons, where only one existed before. We call this process stimulated emission.
The emitted photon, every way identical with the “triggering” or “stimulating” photon, it has some energy direction, phase and state of polarization Furthermore, each of these two photons can cause other stimulated emission event giving a total of photons. This can cause additional stimulated emission and so on.
We can see how chain reaction similar processes could be triggered by one such emission. This is the “amplification” of the laser acronym. The photons have identical energies, directions phase states of polarization.
Related topics:

uses and applications of x rays waves in everyday life

Does a photon have a de Broglie wavelength?