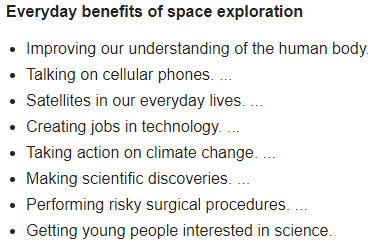 The scientific study of space using especially developed technology is called space exploration. In this post, you’ll learn about the Benefits of Space Exploration.

Let’s Check it out..

What beyond our solar system?

According to Islam and other Ibrahimic religions, the universe was created by Allah. Scientists have been presenting different theories of the creation of the universe from time to time. One of these theories is “The big bang theory “.According to this theory: About 10 to 20 billion years ago, the universe was packed into one giant fireball. Then a tremendous explosion is known as the Big Bang.

This explosion hurled matter and energy in all directions. After the big bang, the universe assumed the form of huge clouds of extremely hot, expanding, and contracting gases. With the passage of time, the matter cooled: the force of gravity pulled together the particles of matter to form stars and galaxies. The Big Bang theory was first proposed in 1927 by a priest, George Lamaitre of Belgium. This theory was supported by the discoveries of Edwin Hubble and Nobel prize-winning scientists Arno Penzias and Robert Wilson.

Although the Big Bang theory is widely accepted, it probably will never be proved. It cannot answer many questions about the occurrence of the Big Bang. Knowing about space is one of the top priorities of development. Scientists have been using telescopes to look into space to study space objects for a long.

Nowadays many more techniques and facilities are available for further research about space. Telescope, spectroscope, spacecraft, etc are some of the latest technologies in this regard. In this section, we will study the technological tools used in space exploration and their benefits in everyday life. Some of these tools are given:

A spectroscope is an instrument that is used to examine different wavelengths (colors) of light. It consists of a series of prisms that split white light into different colors. The set of different colors obtained in this way is called a spectrum. The wavelengths of light coming from the stars help the scientists to know about the elements and compounds present in the stars. Spectroscopes are mostly attached to the telescopes.

Spacecraft is a vehicle designed to travel in space. It is used for different purposes like communication, Earth observation, meteorology, navigation, planetary exploration, and transportation of humans and cargo in space. There are two major classes of spacecraft; robotic spacecraft and manned spacecraft. Robotic spacecraft are sent into space for a collection of data about space, planets, and other heavenly bodies such as asteroids. A robotic spacecraft is controlled from the center of the earth.

Voyager 1 and Voyager 2 were two robotic spacecraft that was used for collecting data about planets Mars and Jupiter. Manned spacecraft carry humans and equipment to space. These spacecraft are larger and have specially built compartments that have the facilities necessary for human survival such as oxygen, pressurized cabins, food, water, and specially built bathrooms. They also have a special structure to protect from dangerous radiations which are very intense in space.

What is a Space station?

For a very long stay in space or for performing experiments in space, large spacecraft called space stations are used. A space station is built in space by carrying its many small parts to space and then assembling them there.

It has more facilities for prolonged living in space. It may have a television for entertainment, bags for sleeping, an exercise machine, and a kitchen for fresh food. One important part of a space station is the scientific laboratory where astronauts perform such experiments that cannot be done on earth because of its gravity.

It is an especially developed manned spacecraft that can be used many times. It is sent into space with the help of a rocket. It carries scientists and equipment. It docks with the space station to transfer its load. After performing its task, it returns and lands back on earth like an airplane.

Special technologies developed for space are now being used on earth to improve the quality of life.A few examples are as follows:

The accurate and reliable weather reports on an hourly basis are possible because of weather satellites in the space. These satellites have also made it easy to predict natural calamities such as floods, storms, tornadoes, and hurricanes.

Deeply buried precious ores of minerals, fossil fuels ( coal, petroleum, and natural gas ), and underground water reserves can be located with the help of satellites. This study is known as remote sensing.

How do astronauts survive and research in space?

For living in space, astronauts need basic necessities (air, food, water, shelter, and warmth) for survival and a suitable compartment for personal comfort on the spacecraft. For this purpose, large space stations have been built in the space. Each space station consists of two main sections.

The unprotected human body cannot survive more than a few minutes in space. As the liquid boils at a lower temperature at lower pressure, the water in the human body can begin to boil at low pressure result in immediate death.

The astronauts wear a specially designed suit called a spacesuit to protect them from such hazards when they go out into space. For breathing in space, they carry air tanks with them that contain pressurized oxygen and nitrogen. their suits circulate the air to their helmets and throughout the suit so that they can breathe. special foods are prepared and packaged for easier transportation and a variety of tastes for the astronauts.

Problems Created by space exploration and their solutions:

Space sickness, effects of weightlessness, conditions resulting from exposure to radiation, and many unwanted side effects are the problems created during the stay in space. Pollution caused by the burning of rocket fuel and disposal of rocket parts etc is one of the major problems created by space exploration.

A few of the tools which are used in space exploration programs are mentioned as follows:

Space rocket is the means of transporting spacecraft, space shuttles, and space stations into space.

The sites from which rockets are launched into space are called Rocket Launching Pads. These are specially built platforms for firing rockets into space. They can withstand extremely high temperatures and large forces produced by rocket exhausts.

Rockets and spacecraft are provided with a telecommunication system so that the space crew in the rocket capsule can communicate with each other and with the Earth stations.

Ground stations receive and process the information from satellites to monitor and guide their motion in space. The main tasks in ground mission control are as follows:

Continuously reporting the position of the satellite or space probe.

Receiving signals from a spacecraft and decoding them into useful information from the scientists is known as monitoring. Progress of a space mission is closely observed and necessary introductions are issued from time to time.

Newton’s First law of Motion Examples in Our Daily Life