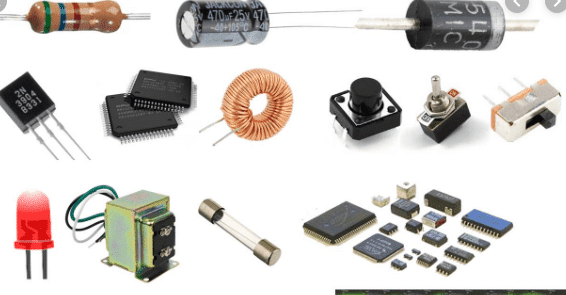 The electronic components are those devices that are part of an electronic circuit. They are designed to be connected to each other, usually by welding, to a printed circuit, to form a circuit. These components can be classified into semiconductors, active, passive, optoelectronic, electromagnetic, etc. In this topic, some common components that you can find in the circuits are defined.

A switch is a device to change the course of a circuit. It can be automatic, centrifugal, chopper, Dip, electrical, railway, etc.

It is a copper winding, which allows to increase or decrease of the voltage in an electric circuit of alternating current, maintaining the frequency. The power that enters the equipment, in the case of an ideal transformer, that is, without losses, is equal to that obtained at the output. Real machines have a small percentage of losses, depending on their design, size, etc.
See also in detail: Difference between step up and step down transformer

It is a semiconductor device that allows the passage of electric current in a single direction with characteristics similar to a switch. Simplified, the characteristic curve of a diode (IV) consists of two regions: below a certain potential difference, it behaves like an open circuit (does not drive), and above it as a short circuit with very small resistance electric

It is a semiconductor device that emits monochromatic light when it is polarized indirectly and is crossed by the electric current. There are red, green, blue, yellow, also infrared, laser and others. Its terminals are the anode (long terminal) and the cathode (short terminal). Its threshold voltage is between 1.3 and 4v depending on the color of the diode.

It is a passive element, it does not generate intensity or voltage in a circuit, and they have a certain resistance to the passage of current, its values ​​are given in Ohms and we know it by the color code.
See in detail: Types of resistors

They are variable resistors, inside they have a carbon track and a cursor that runs through it. Depending on the position of the cursor the resistance value of this component will change. Normally, the potentiometers are used in circuits with low current, to boost the current, since they do not dissipate hardly any power.

It is an electronic component that stores electrical charges for use in a circuit at the right time. It is basically composed of a pair of reinforcements separated by an insulating material called the dielectric. The capacity of a capacitor is to store more or less a number of charges when it is under tension. They are classified as: fixed, paper, plastic, ceramic, electrolytic, mica, variable and adjustable.

It is a semiconductor device that can control a very large current from a very small one. Very common in audio amplifiers. In general, they are of the NPN and PNP types. Its terminals are Collector, Base, and Emitter.
To learn in detail about transistors visit our topics: Bipolar junction transistor and its applications

It is a very thin tablet in which there is a huge amount of interconnected microelectronic devices. An Integrated Circuit (IC) contains a large variety of miniature components. According to the IC. in question will have different functions or applications, they can be amplifiers, counters, multiplexers, encoders, flip-flops, etc. Its terminals are counted in the opposite direction to the clockwise rotation taking a reference point.

Basically, it is a powerful device, it has an electromagnet that acts as an intermediary to activate a switch, the latter being totally independent of the electromagnet. It consists of two different circuits: an electromagnetic circuit (electromagnet) and a contact circuit. Its operation is based on the electromagnetic phenomenon. When the current flows through the coil, it produces a magnetic field that magnetizes a soft iron core (ferrite). This attracts the armature that forces the contacts to touch.
To See related topics visit our page: Electronics

They are passive components of two terminals that generate a magnetic flux when an electric current is circulated through them. They are manufactured by winding a conductive wire on a core of ferromagnetic material or air. Its unit of measure is Henry (H) in the International System but submultiples mH and mH are usually used.

The coils (also called inductors) consist of coiled conductor wire. When a current passes through the coil, around it a magnetic field is created that tends to oppose sudden changes in the intensity of the current. Like a capacitor, a coil can be used to differentiate between fast and slowly changing signals (high and low frequencies). When using a coil in conjunction with a capacitor, the coil voltage reaches a maximum value at a specific frequency that depends on the capacitance and inductance. This principle is used in radio receivers when selecting a specific frequency using a variable capacitor.

The device that converts chemical energy into electrical. All batteries consist of an electrolyte (which can be liquid, solid or paste), a positive electrode, and a negative electrode. The electrolyte is an ionic conductor; one of the electrodes produces electrons and the other electrode receives them. When the electrodes are connected to the circuit to be fed, an electric current is produced.

The device is used to protect an electrical circuit from excess current. Its essential component is usually a wire or a metal band that melts at a certain temperature. The fuse is designed so that the metal band can be easily placed in the electrical circuit. If the circuit current exceeds a predetermined value, the fusible metal melts, and the circuit breaks or opens. Devices used to detonate explosives are also called fuses.

A cylindrical fuse is formed by a band of fuse metal enclosed in a ceramic or fiber cylinder. Metal terminals fitted to the ends of the fuse make contact with the metal band. This type of fuse is placed in an electrical circuit so that the current flows through the metal band and the circuit is completed. If there is an excess of current in the circuit, the metal connection heats up to its melting point and breaks. This opens the circuit, stops the flow of current, and thereby protects the circuit.

Classification of Electronic Components:
1.According to its operation can be classified into:
Liabilities: Do not make a profit, limit the passage of current, protect and / or join active components such as resistors, capacitors or inductors. So are switches, fuses, relay or transducers.
Assets: They are capable of exciting, amplifying or controlling a circuit such as diodes, transistors or integrated circuits
2. According to their physical structure:
Discreet: they are those that are encapsulated one by one, as is the case of resistors, capacitors, diodes, transistors, etc.
Integrated: they form more complex assemblies, such as an operational amplifier or a logic gate, which can contain from a few discrete components to millions of them. They are called integrated circuits.3. According to the manufacturing base material:
Semiconductors:  They are all those in which semiconductor material of type P and / or type N is used with the addition or not of impurities.
Diodes, transistors, diacs, thyristors, triacs, and integrated circuits fall into this category.
No semiconductors:  No semiconductor material is used in its construction.
4. According to their function, they can be classified into:
Sensors: Collect information about a process
They can be Discreet, and they have a certain amount of information output, in the digital signal. For example, the limit switches, pushbuttons, scalers or be Continuous, have infinite possibilities of the output of information in the analog signal. For example, LDRs, PTCs, potentiometers, and photo
transistors.
Actuators: They act to modify the process
Examples of them are motors, LEDs, resistors, lamps, buzzers, etc.
Controllers: Control the process
as integrated logic gates, operational amplifiers, pics, microcontrollers, PLCs, etc.
5. According to their type, they can be classified into:
5-a We will begin to know the Passive Components
Resistors:
Fixed:  Factory setting cannot be adjusted
There are different types depending on their construction: Film, wire, ceramic, etc. each has different electrical characteristics.
Variables:
according to connection form can be potentiometers or rheostats.
A potentiometer is a resistor whose resistance value can be adjusted. In this way, indirectly, the current intensity can be controlled. They are used as variable resistive dividers.
The rheostats have a free end terminal and behave as variable resistors.

They are resistors whose ohmic value depends on the light that falls on them. One of the most common applications is the use of photo controls for public lighting.

Thermistors: Its resistance depends on the temperature at which it is, they can be of 2 types:
Related topics:
Difference between BJT and FET
Ohm’s law
Types of logic gates
Multivibrators
Difference between step up and step down transformer
Facebook Twitter Pinterest Reddit WhatsApp

Types of capacitors with applications

Structure of atom for class 9 and 11

How many Types of MOSFET Transistor?