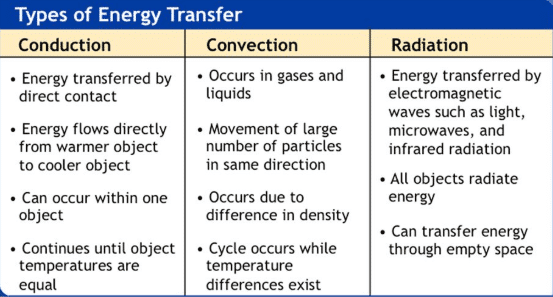 There are three different ways of heat transfer. If you learn the difference between conduction, convection, and radiation, then you are in the right place. So, stay with us for a few minutes.

What is the conduction of heat?

How does conduction of heat occur?

In dielectric solids, the vibrations of molecules are transmitted through the body like waves, as a result of the elastic bonding between the particles.
These waves are of the same nature as sound but have very much higher frequencies and their energies are quantized as phonons.
On balance, more energy is transferred by phonons from hotter to colder parts of than is transferred the opposite way.
Theories of heat conduction treat the phonons as if they were gas molecules moving within the space occupied by the solid, being scattered by irregularities in the material.
Conduction in nonmetallic liquids is intermediate in character between that in solids and that in gasses.
See also: Thermal conductivity

What is the convection of heat?

The process of transfer of heat in a fluid by the movement of the fluid itself. There are two types of convection of heat:

What is Radiation of heat?

Radiation is one of the ways of modes of heat transfer in which heat is transferred directly in the form of waves. The heat reached on the earth from The Sun is an example of radiation heat transfer.
See also: Blackbody radiation

Watch the video to learn about the difference between heat transfer methods by conduction, convection, and radiation.
Related topics

Difference between Diesel Engine and Petrol Engine in Tabular Form

Is an electron a particle or a wave?