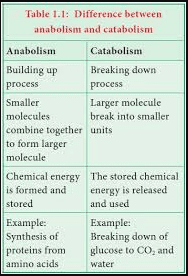 While anabolism builds large molecules from smaller ones, catabolism is a reduction reaction where a complex molecule is converted into a simpler one.

Difference between Anabolism and Catabolism in Tabular form

The word anabolism comes from the Greek ana, which means ‘up’, and ballein , which we can translate as ‘throw’.

Anabolism is one of the two parts into which metabolism is divided, which is also known by the name biosynthesis.

Anabolism is a constructive chemical reaction where complex molecules are synthesized from simpler ones that can be organic or inorganic. Thus the molecules can grow and renew themselves, or be stored as energy reserves.

This metabolic process of construction, where energy is consumed to obtain large molecules from smaller ones, is possible thanks to the energy contribution of adenosine triphosphate (ATP).

In these reactions, the most oxidized compounds are reduced. Through anabolism, living things can form proteins from amino acids and thus maintain body tissues.

You may also be interested in seeing Photosynthesis and respiration.

Catabolism is the part of the metabolic process by which different organic nutrients are degraded, reduced, or oxidized to their simplest forms so that the body assimilates them and transforms them into energy. This energy is essential for the functioning of anabolism.

The energy that is released is stored in adenosine triphosphate (ATP) molecules, and thus the cell can carry out vital actions such as muscle contraction and the synthesis of molecules.

It is a destructive phase of reduction where, from a complex organic molecule, such as carbohydrates and lipids, simpler ones such as H 2 O, CO 2 , lactic acid or ammonia are obtained.

A catabolic process is digestion , in which large molecular complexes are broken down and transformed into simpler forms so that they can be used as raw material and energy in anabolic processes. Because of this, digestion is essential for anabolism to work properly.

Bacteria are often capable of metabolizing iron and sulfur.

Difference between Fats and Oils

What is the Difference between Cellular Respiration and Gaseous Exchange?

Difference between Veins and Arteries