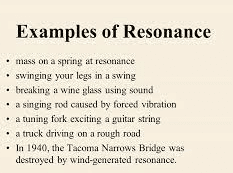 Resonance occurs when the frequency of the applied force is equal to one of the natural frequencies of vibration of the forced or driven harmonic oscillator. Swing, Guitar, Pendulum, Bridge, and Music systems are a few examples of resonance in everyday life.

Associated with the motion of a driven harmonic oscillator, there is a very striking phenomenon, known as resonance. It rises if the external driving force is periodic with a period comparable to the natural period of the oscillator.

In a resonance situation, the driving force may be feeble, and the amplitude of the motion may become extraordinarily large. In the case of the oscillating simple pendulum, if we blow to push the pendulum whenever it comes in front of our mouth, it is found that the amplitude steadily increases. 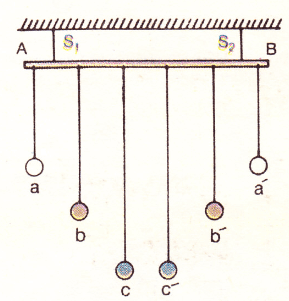 To demonstrate this resonance effect an apparatus. A horizontal rod AB is supported by two strings S1 and S2. Three pairs of pendulums aa’, bb’ and cc’ are suspended to this rod. The length of each pair is the same but is different for different pairs. If one of these pendulums say c, is displaced in a direction perpendicular to the plane of the paper, then its resultant oscillatory motion causes in rod AB a very slight disturbing motion, whose period is the same as that of c’. Due to this slight motion of the rod, each of the remaining pendulums (aa’, bb’, and cc’) undergo a slight periodic motion. This causes the pendulum c’, whose length and , hence, the period is exactly the same as that of c, to oscillate back and forth with steadily increasing amplitude. However, the amplitudes of the other pendulums remain small throughout the subsequent motion of c and c’, because their natural periods are not the same as that of the disturbing force due to rod AB.

The energy of the oscillation comes from the driving source. At resonance, the transfer of energy is maximum.

Examples of resonance in physics

We come across many examples of resonance in everyday life. 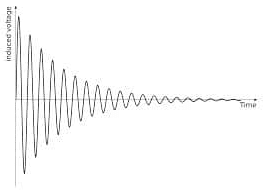 We have known from our everyday experience that the motion of any microscopic system is accompanied by frictional effects. While describing the motion of a simple pendulum, this effect was completely ignored. As the bob of the pendulum moves to and fro, then in addition to the weight of the bob and the tension in the string, bob experiences viscous drag due to its motion through the air. Thus simple harmonic motion is an idealization. In practice, the amplitude of this motion gradually becomes smaller and smaller because of friction and air resistance because the energy of the oscillator is based up doing work against the resistive forces. The amplitude of the damped simple harmonic wave changes with time as compared with an ideal un-damped harmonic wave. Thus we see that:

Damping is a process whereby energy is dissipated from the oscillating system.

An application of damped oscillations is the shock absorber of a car which provides a damping force to prevent excessive oscillations.

See Also: Difference between the free and forced oscillation

A heavily damped system as a fairly flat resonance curve as sown in an amplitude-frequency.

The effect of damping can be observed by attaching a pendulum having light mass such as a pith ball as its bob and another of the same length carrying a heavy mass such as a lead bob of equal size to a rod. They are set into vibrations by the third pendulum of equal length, attached to the same rod. It is observed that the amplitude of the lead bob is much greater than that of the pith ball. The damping effect for the pith-ball due to air resistance is much greater than for the head bob.

Resonance in physics with animation

Different Types of Waves in Physics With Examples