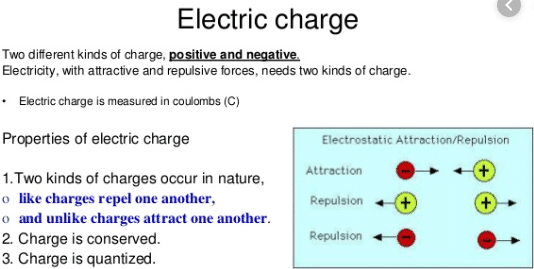 Its formula is given as:
Q =I × t
Where Q is the total charge, I is the amount of current and t is the time.

If you walk across a carpet in dry weather, you can draw a spark by touching a metal doorknob. On a grander scale, lightning is familiar to everyone. Such phenomena suggest the vast amount of electric charge that is stored in the familiar objects that surround us.

The electrical neutrality of most objects in our visible and tangible world conceals their content of enormous amounts of positive and negative electric charge that largely cancel each other in their external effects. Only when this electrical balance is disturbed does nature reveal to us the effects of uncompensated positive or negative charge. When we say that a body is “charged” we mean that it has a charge imbalance, even though the net charge generally represents only a tiny fraction of the total positive or negative charge contained in the body.

Charged bodies exert forces on each other. To show this, let us charge a glass rod by rubbing it with silk. The process of rubbing transfers a tiny amount of charge from one body to the other, thus slightly upsetting the electrical neutrality of each.

How charges are produced?

If we run a plastic comb through our hair and then bring it near small pieces of paper, the comb attracts them. Similarly, amber when rubbed with silk, attracts small pieces of paper. This property of attraction or repulsion between substances is due to the electric charges they acquire rubbing. 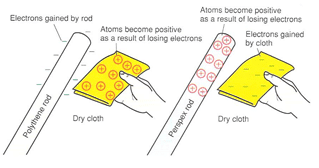 Now take a glass rod and rub it with silk and suspend it horizontally. When we bring the plastic rod rubbed with fur near to the suspended glass rod, we observe that both the rod each other.

Rods are unlike and their attraction implies that charges on two rods are not of the same kind but of opposite nature.

What are the two types of electric charge?

Basically, there are two types of charge, which are given below:

“When a material losses electrons then the number of protons increase in the material, there is a net positive electrical charge .”
The positive and negative labels for electric charges are due to Benjamin Franklin (1706-1790) who, among many other accomplishments, was a scientist of international reputation. It has even been said that Franklin’s triumphs in diplomacy in France during the American War of independence may have been made possible because he was so highly regarded as a scientist.
Electrical forces between charged bodies have many industrial applications, among them, being electrostatic paint spraying and powder coating, fly ash precipitation, non-impact inkjet printing, and photocopying. For example, shows a tiny carrier bead in a photocopying machine, covered with particles of black powder called toner, that stick to the carrier bead by electrostatic forces.
These negatively charged toner particles are eventually attracted from their carrier beads to a positive charge latent image of the document to be copied, which is formed on a routing drum. A charged sheet of paper then attracts the toner particles from the drum to itself, after which they are heat fused in place to make the final copy.

“When a material gains electrons then the number of electrons increase in the material, there is a net negative  electrical charge.”
The electron has a negative charge, while the proton has a positive charge. in a material number of protons, electrons are equal in numbers. Electrical charge is a, which is a fundamental characteristic of electrons and protons, is symbolized by Q.
Static electricity is the presence of net positive and negative charges in a material. Everyone has experienced the effects of static electricity from time to time, for example when attempting to touch a metal surface or another person or when clothes in the dryer cling together. 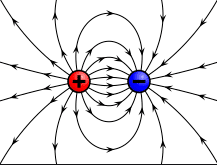 Like charges repel each other and unlike charges attract each other, A force acts between charges, as evidenced by the attraction or repulsion. This force, called an electric field, consists of invisible lines of force.

The gold leaf electroscope is a sensitive instrument for detecting charges. It consists of a brass rod with a brass disk at the top and two thin leaves of gold foil hanging at the bottom in Fig. The rod passes through an insulator that keeps the rod in place. Charges can move freely from the disk to the leaves through the rod. A thin aluminum foil is attached to the lower portion of the inside of the jar. Usually, the aluminum foil is grounded by connecting a copper wire. This protects the leaves from external electrical disturbances.

Detecting The Presence of Charge:
In order to detect the presence of charge on anybody, bring the body near the disk of an uncharged electroscope. If the body neutral there will be no deflection of the leaves in above Fig:

The charge of the leaves will flow to the Earth through the wire. Now if we first break the Earth connection and then remove the rod, the electroscope will be left with a positive charge in above Fig:

Now in order to detect the type of charge on a body, bring the charged body near the disk of the positively charged electroscope. If the divergence of the leaves increases, the body carries positively charges are shown in above Fig:

On the other hand, if the divergence decreases, the body has negative charge are sown in above Fig:

An electroscope can also be used to distinguish between insulators and conductors. Touch the disk of a charged electroscope with the material under test. If the leaves collapse from their diverged position, the body would be a good conductor. If there is no change in the divergence of the leaves, it will show that the body under test in an insulator.

What is the unit of electrical charge?

Electric charge(Q)  is measured in Coulombs, symbolized by C.

To learn more about charges watch the video:

The charge is conserved:

This process is called “pair production”.The electron and positron can combine to form γ-ray again. Such a process is termed as pair annihilation.

The charge is Quantised:
Charge on a body can be an integral multiple of electronic charge.i.e.Q=± n e. If a body gains electrons, it is said to be negatively charged and if it loses electrons, it is said to be positively charged. Though there are particles called “quarks” which may have charges e/3 or 2e/3.Since these are generated during the disintegration of the nucleus (neutron, proton, and so on ) these cannot be transferred. The charge on an electron is 1.6× 10-19C.
Related topics:

What is Modulation in Physics?

Difference between resistance and resistivity

Different types of resistors with pictures,function and uses