If W is the work done in moving a unit positive charge q from infinity to a certain point in the field, the electric potential V at this point is given by:

V = W/q
It implies that electric potential is measured relative to some reference point and like potential energy we can measure only the change in potential between two points.

Electric potential is the scalar quantity. Its unit is volt which is equal to joule per coulomb (J/C).
See Also: Types of charges

Hence we define the change in potential energy (P.Eb – P.E a), when a point charge q moves from some point a to another point b.As the negative of the work done by the electric force on charge as it moves from point a to b.
For Example, consider the electric field between two equally but oppositely charged parallel plates, we assume their separation is small compared to their width and height, so the field E will be uniform over most of the region as shown in the figure: 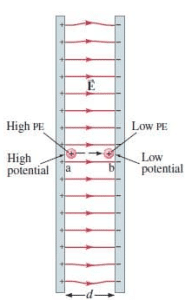 In this case, the electric field is uniform. In the case which is illustrated above potential difference decreases, as the charged particle moves from point a to b, and the particle’s kinetic energy increases by an equal amount.

How Atmospheric pressure is measured?

law of conservation of energy: Definition, formula and examples