This is a complete Post About K.E and Examples of Kinetic Energy.
So If You want to learn in detail about K.E in detail, You”ll love the Visual Examples in this post.
Let’s Dive Right in.
Contents:

What is Kinetic Energy?

Kinetic energy is defined as ” The energy possessed by an object due to its motion.”It derived from the Greek word kinetikos which means motion. It depends on the mass and velocity of an object.  SI Unit of K.E is the joule. It is a Scalar quantity. The kinetic energy formula is expressed as:

where m is the mass of the body moving with velocity v. if the mass is given in kilogram and velocity v is given in meter/second then kinetic energy comes out in joules. one joule is the energy when a force of one newton displaces a body through one meter.

What are some examples of kinetic energy?

Here are some Kinetic Energy Examples: 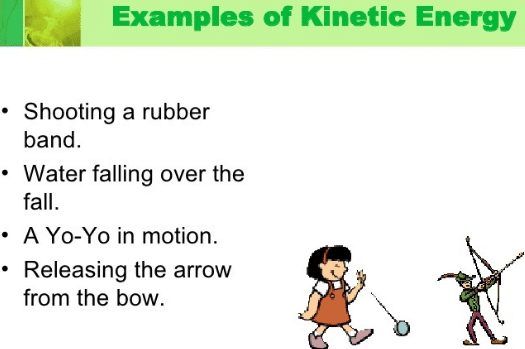 Similarly, a basketball shows kinetic energy, the K.E is proportional to the ball’s mass and the square of its velocity. to throw the same ball twice as fast, a player does more work and transfers four times the energy.

What are the different types of kinetic energy? 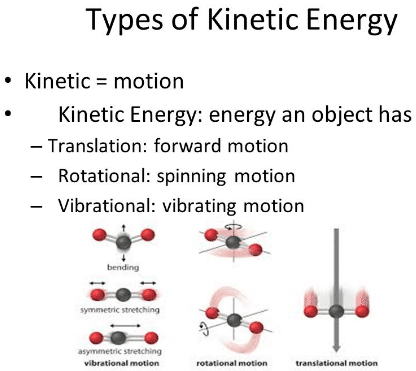 Detail of these types of kinetic energy given below:

Heat is a form of energy given out by hot bodies. A large amount of heat is obtained by burning fuel. Heat is also produced when motion is opposed by frictional forces.

Electricity is one of the widely used forms of energy. Electrical energy can be supplied easily to any desired place through wires. We get electrical generators. These electric generators are run by hydropower, thermal power or nuclear power.

When you knock at the door, you produce sound. A sound is a form of energy. It is produced when a body vibrates; such as vibrating diaphragm of a drum, vibrating strings, of a sitar, and vibrating air column of wind instruments such as flute pipe, etc..

Light is a form of energy. The sun is the major source of light for us. Light helps plants to make food in the process of photosynthesis.

What are the 5 kinetic energy Examples?

What are 2 types of kinetic energy?

Sound energy and electrical energy are 2 main types of K.E.

Two factors that affect Kinetic Energy that is:

How Atmospheric pressure is measured?